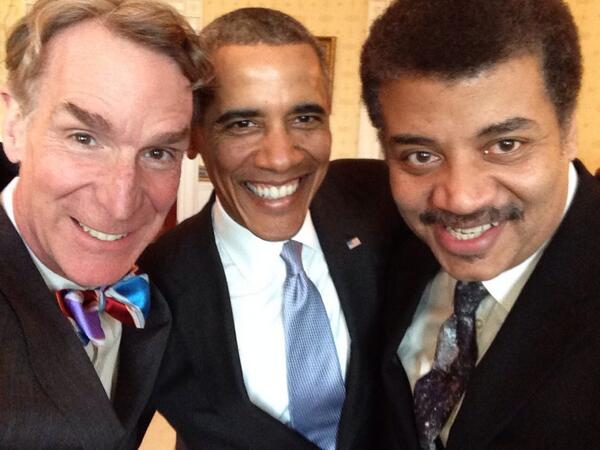 I wonder what they could have been talking about? Hint, NASA funding! Obama with Neil D. Tyson, and Bill Nye (the Science Guy).

Yes, it’s coming, after the “fiscal cliff” crap. The US needs to get a handle on assault weapons and large volume ammo clips. The Pope remains silent on the matter? https://twitter.com/Pontifex  Um, is he a NRA supporter? They are dead silent too. https://twitter.com/NRA

Six days ago, the NRA tweeted this; “Anti-Hunters Want You Labeled as a Domestic Terrorist http://www.nraila.org/news-issues/articles/2012/anti-hunters-want-you-labeled-as-a-domestic-terrorist.aspx  … “

Obama Gets Concession Call From Romney

“You sure, we could call Justice Stevens?   Well 47% of America thanks you for making this quick.”

I don’t blame him… I won’t be happy if Obama is suddenly saying, “Michele, I have to get some more of those Calamari noodles..in Tailand..BRB”.

A view you can only get if you were there, from Liz Gorman.

Many of the photographs at the link below are from a real war zone, and are not as pretty as the defiant child flashing V for Victory, above.

If the rumors about Obama wanting to take a harder line on Syria are true, I support that 100%.  Key word “Stealth Bomber”.

Obama and Biden signatures, just in case someone wonders where it came from.

The US is in the same position as Greece (almost). We have a chance to correct the problem in the next few months (“fiscal cliff”). And the tax increases, plus spending cuts will all happen, if Obama does nothing. He can cruise to a near balanced budget without lifting a finger.

One of the few times in US history, that literally punting, is a good thing!  It’s 3rd and 20 Obama…what will you do?

The Secret Service had to going insane?? Great picture though.

They are pretty close on some things.  The biggest departure is Romney’s “drill baby drill” mentality.  You know that will run out eventually?  Why wait to invest in renewables? Oh right, Big Oil.

At least they have a sense of humor.